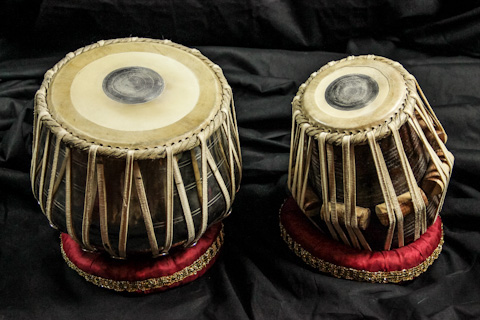 The tabla is a North Indian classical percussion instrument. It is generally believed that in the thirteenth century, noted musician Amir Khusrau divided a larger drum, known as the pakhawaj, in half, thus inventing the tabla. The name “tabla” is derived from the Arabic word “tabl,” and literally means “drum.”

Used mostly as an accompaniment to Hindustani music, it may be played as part of a group or as a solo instrument. It is frequently associated with Kathak dance and forms an integral part of any performance. The difficulty of the instrument is such that it takes many years for a student to reach a proficient level, and even more to master it with confidence. Tabla instruction is usually conducted under the watchful eye of a guru, a master teacher. The relationship between student/teacher is an almost sacred bond which lasts a lifetime.

Nowadays, tabla artists often collaborate with Western musicians to produce a new generation of compositions. This has increased the popularity of the instrument across many cultures and countries.